Brave New World Week should continue early next week when hopefully they fix my internet so that it stops going down repeatedly.  I still have the second half of the writer's draft script and the blue revision script to post and discuss.  After that, uniform nametag pins.
Posted by Unknown at 6:26 PM 3 comments:

Greetings from Brave New World week here on the seaQuest MPS Blog.  Today is all about the first half of the writer's draft script of the third season premiere.  Compared to the treatment and beat sheet, this piece gets much closer to the final episode.  At fifty-nine pages, the script is a little long for the forty-five minute time slot.  Indeed, there are a few longer scenes, perhaps adding a few minutes.  There is also some changed dialog, but overall this is quite close to what made it to screen.  One interesting issue it the script's structure, seaQuest had a teaser leading into the opening credits and then four acts punctuated by commercials.  This script has no teaser, treating what became the teaser and act one as a single lengthy act one.  Today then, I will cover act one and two.

Bridger's grandson is still Christian, rather than Michael, Nexus is part of Micronesia and the Macronesian Alliance is still just the Alliance, although this is now acknowledged as part of New Australia's political Right.  The change from New Australia to Macronesia was coming, as this has been handwritten into the script.  Otherwise, the names and scene locations pretty much match the final episode; it is ten years in the future.

The opening scenes with the attack on Nexus has a few extra beats, there are some scatter mines launched, but still the same result, loss of fresh water and Fredericks taking out an enemy sub over the line.

Lucas' interrogation  now happens at what was formely the Ballard Institute in San Diego.  There is also a clearer reason why Hudson brings a gun into the meeting rather than just being an ass.  Afterwards, Marrs tells Hudson that Lucas' synaptic responses jumped when he saw the gun, but he was telling the truth.

The find-the-crew scenes are each longer.  In the Thailand Bar there is a bit more of an explanation of what is going on.  Dagwood and Darwin share a longer scene.  Darwin is part of a Sea World like dolphin show.  Dagwood sees him and starts to walk to the front, the crowd watching the show complain as he gets in their way.  Dagwood then rushes the tank and jumps into it.  This would have taken a while to film, had some logistical challenges, and does not add a lot to the overall story, so I can see why it was cut.  Finally, the Ford-Henderson scene has less left to the imagination, with them asking "did we."

Finally, at Bridger's Island, Bridger's grandson Christian pulls a gun on Lucas, walks him to a camouflaged hut, but the kid is in a weakened state and Lucas is able to get the gun.  At that point Bridger enters the scene and he and Lucas share some additional dialog:
Lucas "Captain..."
Bridger "Lucas...thank God..."
The two men hold each other fiercely.
Lucas "God I was so afraid..."
Bridger "I was too, son...  I was too..."
I am sure the fans of the Bridger-Lucas parental dynamic would have loved the son part right there.  And, with that, end of Act Two. 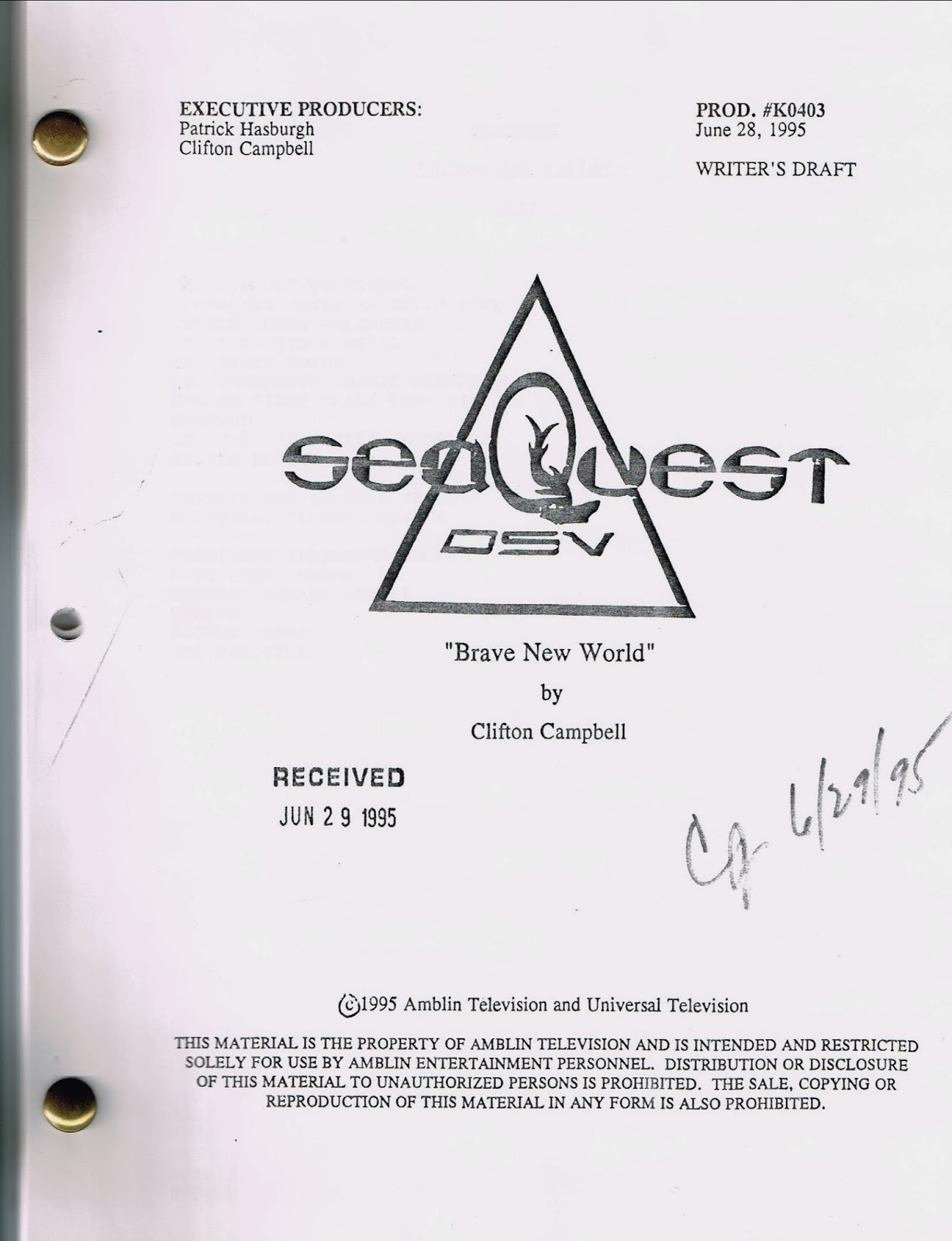 Next Time on the seaQuest MPS Blog: the second half of the Brave New World writer's draft script.
Posted by Unknown at 5:01 AM No comments:

Hello again from the seaQuest MPS Blog with the next step in the development of Brave New World, the third season opener and practically another pilot of seaQuest.  After the treatment, several pages sketching out the major points of the element, the beat sheet, also known as a scene sheet, breaks the action into individual scenes.  This nine-page beat sheet, dated June 13, 1995 shows the season opener coming closer to what was finally realized on screen, but there are still differences of interest.  For example, Hudson and Bourne now have their final names, but Macronesia is still the Southern Alliance, and the year is still 2028.  The reasons for global instability are many: pirates and privateers, funded by corporations, sovereign nations taking over underwater confederations, the Southern Hemisphere is still against living under the yolk of the Northern Hemisphere, and the Alliance uses particle subduction to liquify land into ocean to make mining easier, but also it can be used as a terror weapon.

Moving through the story, the UEO Central Command was originally in the Balboa Institute for Oceanographic Research, they had yet to acknowledge Robert Ballard as in the final episode.  The Nexus colony is the linchpin of the Micronesia colonies, which Bourne threatens to turn the trench they are in to mud if Hudson attacks.  The finding of the seaQuest crew is relatively the same, although Lucas is already in custody, and a handwritten notes suggests they were thinking of deleting the scene of Dagwood and Darwin at Sea World, and instead having Dagwood simply in the Saigon bar with Brody, Piccolo, and O'Neil.

There are lots of little pieces that were deleted, the episode was already too busy and could have been a two parter.  For example, when Lucas gets to Bridger's island, Bridger's grandson holds him at gunpoint and walks him over to a hidden hut to find Bridger.  Also, when they go to retake Nexus, their is a sub fighter battle, an assault on the colony, Bourne tries to escape in his launch, which then explodes once it is cut off from escaping.  The world thinks he is dead, but he is not really, it was a ruse.

This is also an in-development document.  There are several handwritten notes and questions.  Pointing out that the crew cannot really look up from the bridge and see the helicopters lifting seaQuest from the cornfield.  And, asking if Bridger's son had been seen before, for the purpose of a photo that Bridger's grandson had in his possession.  The writers had also yet to hit on the swim tubes as the secret way to get into the colony, but they are getting closer: "Then something Darwin (says) reminds Bridger of an old submarine maneuver from his past." No mention of what that maneuver was going to be, still the battle for Nexus described above sounds like it would have been cool, if too long and expensive to fit in the episode.

Finally, when Bridger gives his goodbye speech, he mentions Hyberion, and the deaths of Smith and Ortiz.  He leaves the seaQuest, because "he knows now she is an instrument of peace, and must be free to be dispatched for war."  A statement that seems problematic, an instrument of peace...for war? 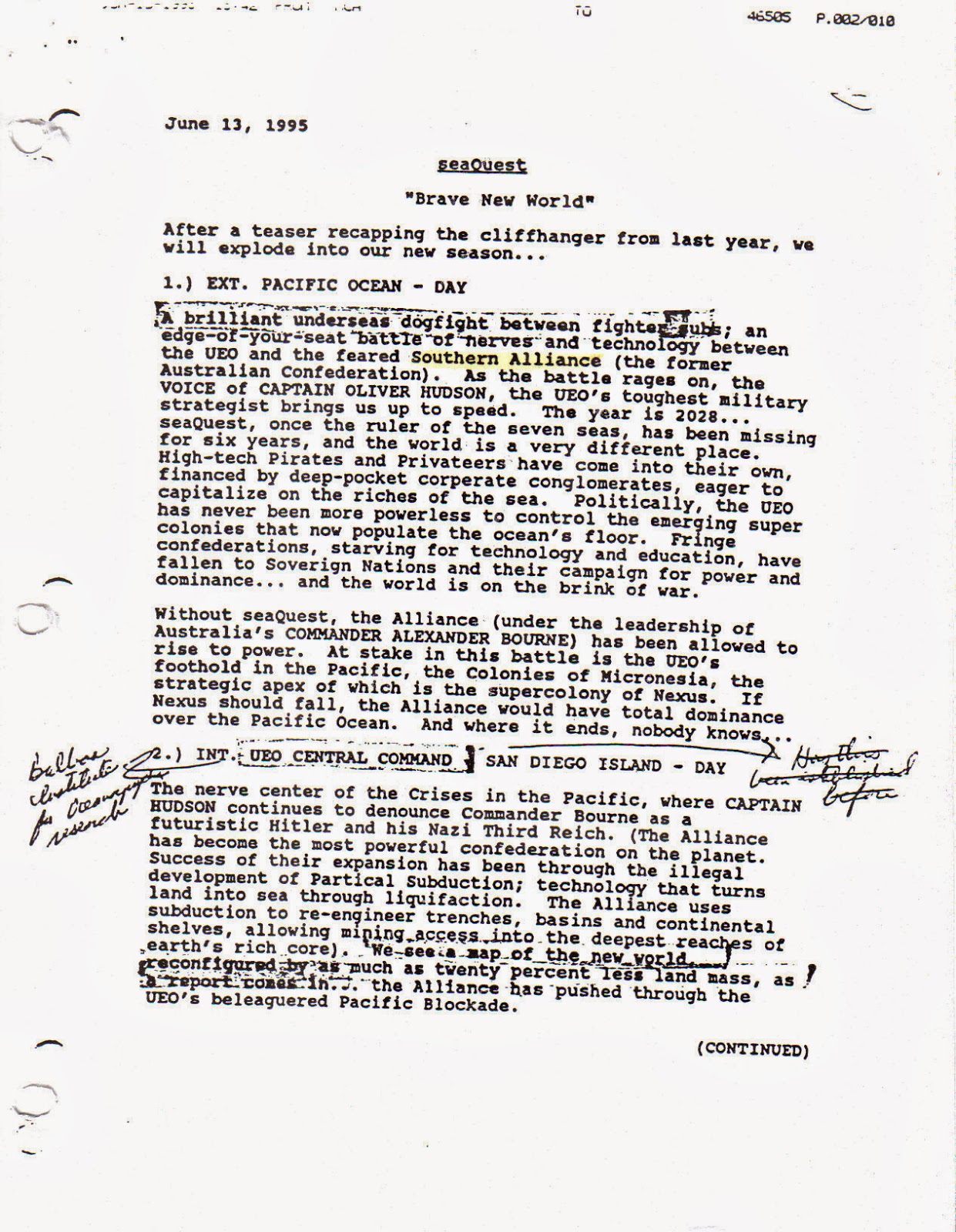 Next Time on the seaQuest MPS Blog: Writer's Draft of Brave New World.
Posted by Unknown at 5:19 AM No comments:

It is that time again for the seaQuest MPS Blog, with this week focused on the scripting development of the third season opener, Brave New World.  Quite soon after they learned that the show had been renewed, the writers would start to outline a few episodes for the next season.  They put together treatments, a couple of pages per episode that describe the major plot points and help sell the ideas of the episode.  I have them for Season Premiere (Brave New World),  Kingdoms of Fire and Ice (In the Company of Ice and Profit), The Tunnel Project (Destination Terminal), Second Chance (Second Chance), Flowers for Dagwood (Unmade), Reunion (Reunion), Outbreak (Equilibrium).  Although the episode treatments I have for the third season are undated, based on the timing of the longer beat sheet and first draft script for Brave New World, I imagine these treatments come from May or early June 1995.

The three-page, and creatively titled, Season Premiere treatment has some interesting differences from the final episode: Hudson is Captain Oliver Hollenbeck, Bourne is Commander Alexander Bourne-Burundie, the Spector sub-fighters are Lysander-class SSKN-9, and the Macronesian Alliance is the New Southern Alliance, oh and the year is 2028.  Missing for six years seems to make more sense than missing for ten years.  I never did buy the whole, we have been missing for ten years and our already a few years old sub is still able to compete with newer models.

The basic pattern of the episode is there in this treatment, opening with an underwater battle, the Alliances is about to get control of the Pacific, Hollenbeck strongly interrogates Lucas, seaQuest personnel appear in strange places with no memory, seaQuest is in a cornfield, they get her back in the water, the Alliances moves to take Nexus, Lucas finds Bridger, and Bridger, Hudson, and the seaQuest free Nexus.  There are certain parts of the story missing, e.g., no grandson for Bridger, no swimtube entry into the Nexus colony.  The treatment specifically notes the deaths of Smith and Ortiz on Hyberion.  It also suggests that the Alliance got rich from mining and aquaculture, no mention of weapons like subduction and particle liquefaction.  Instead, the Alliance and Bourne-Burundie became "the voice of a new Southern Hemisphere, tired of living by Northern Hemisphere's law," reading more like political-economic-ideological expansion, rather than the more military-driven imperial expansion seen in the final episode. 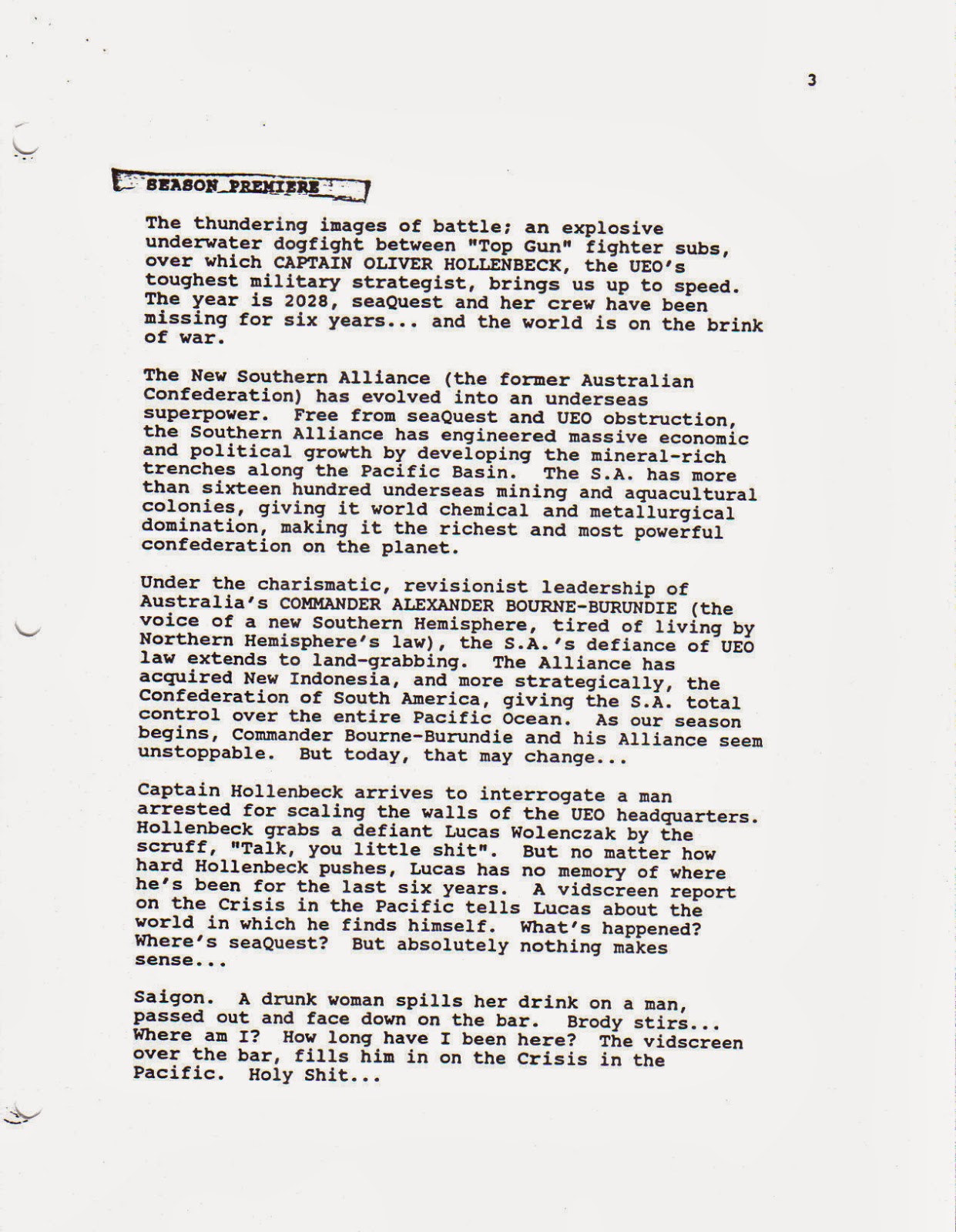 Greetings everyone, it is Brave New World week here on the seaQuest MPS Blog.  In my script collection I have a beat sheet, treatment, writer's draft and blue revision of the third season premiere.  In case you were wondering, a beat sheet is a page or two quick run down of an episode, a treatment is a longer version starting to set up individual scenes, a writer's draft is the first version of the script, and the blue revision is several versions down the line.  These different versions help track the development of what was essentially a third pilot for seaQuest.  Every other day or so this week I will post and discuss these pieces in order, starting with the beat sheet for the then title Season Premiere featuring Captain Oliver Hollenbeck. 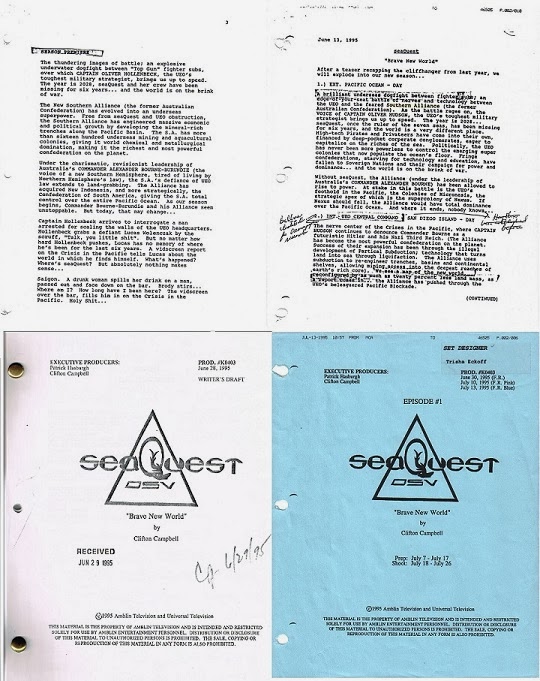 Next time on the seaQuest MPS Blog: Brave New World Treatment.
Posted by Unknown at 4:30 AM No comments:

Greetings once again from the seaQuest MPS blog.  Today's entry is a prop Omni-Pacific ticket from the third season's Destination Terminal.  This was one of the weaker episodes of the third season, partly because it is a super train gone a muck story, but mainly because of Ford's dancing.

The Omni-Pacific was a train running between New San Francisco and Beijing. 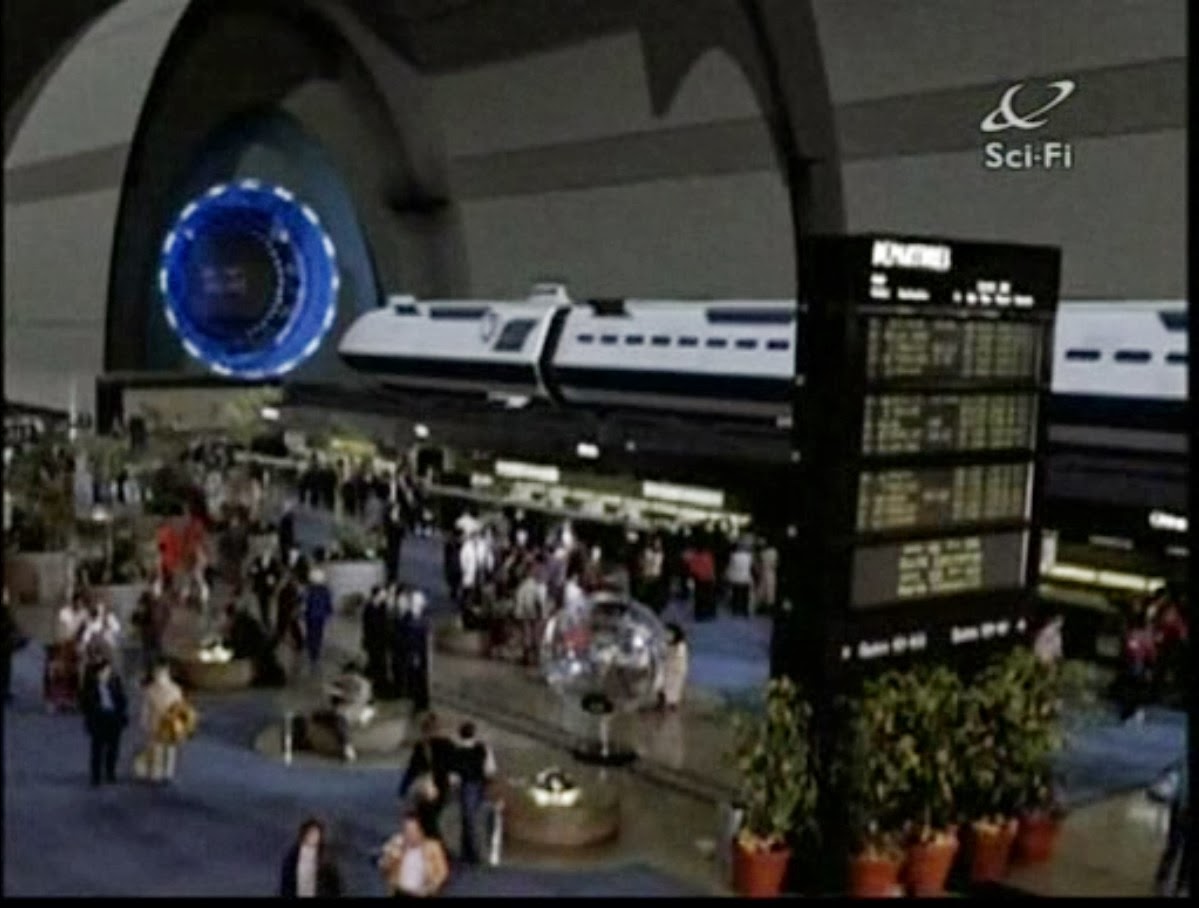 Somehow Ford was able to get two tickets for the train's maiden voyage.  He decided to invite Henderson.  One of the clear improvements over the second season was how some of the character storylines actually played out over the third season. 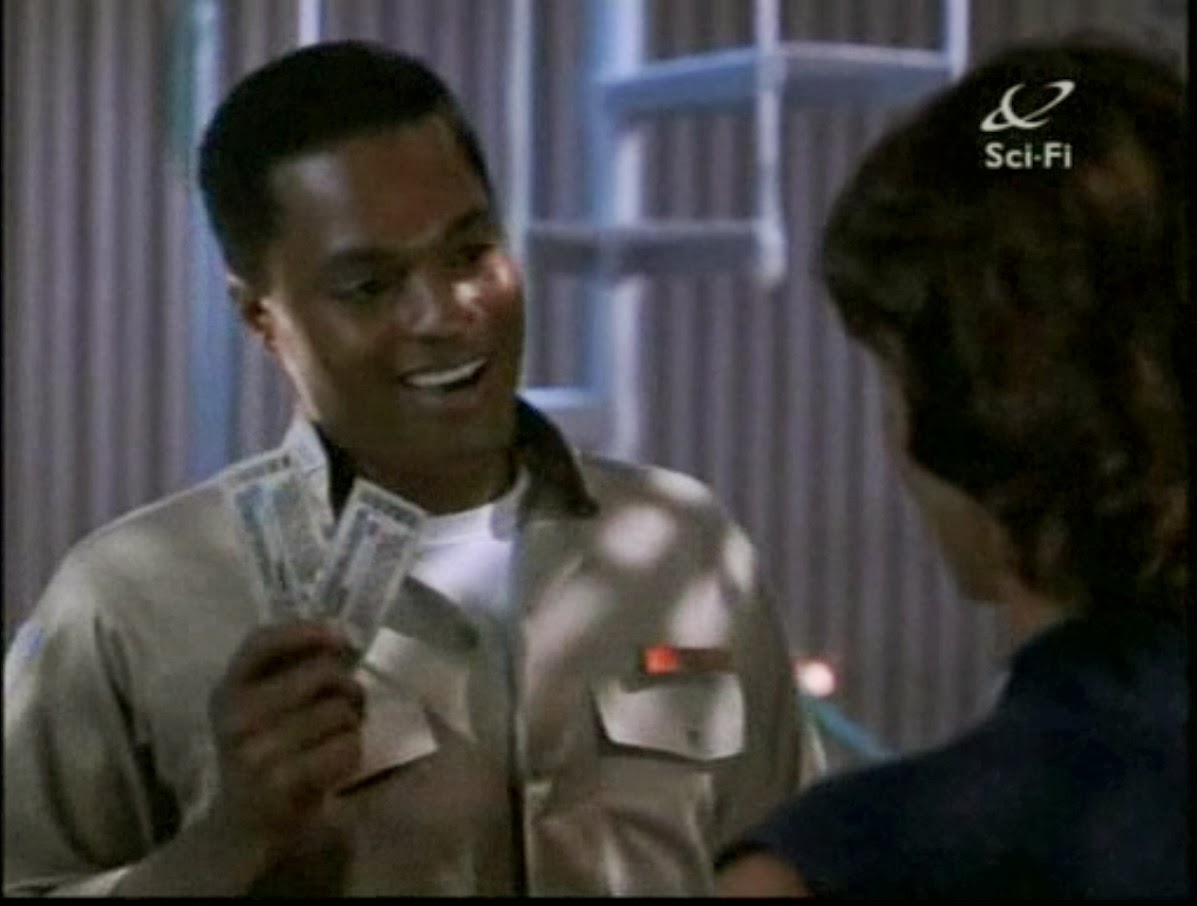 Here is the front of one of these prop tickets. 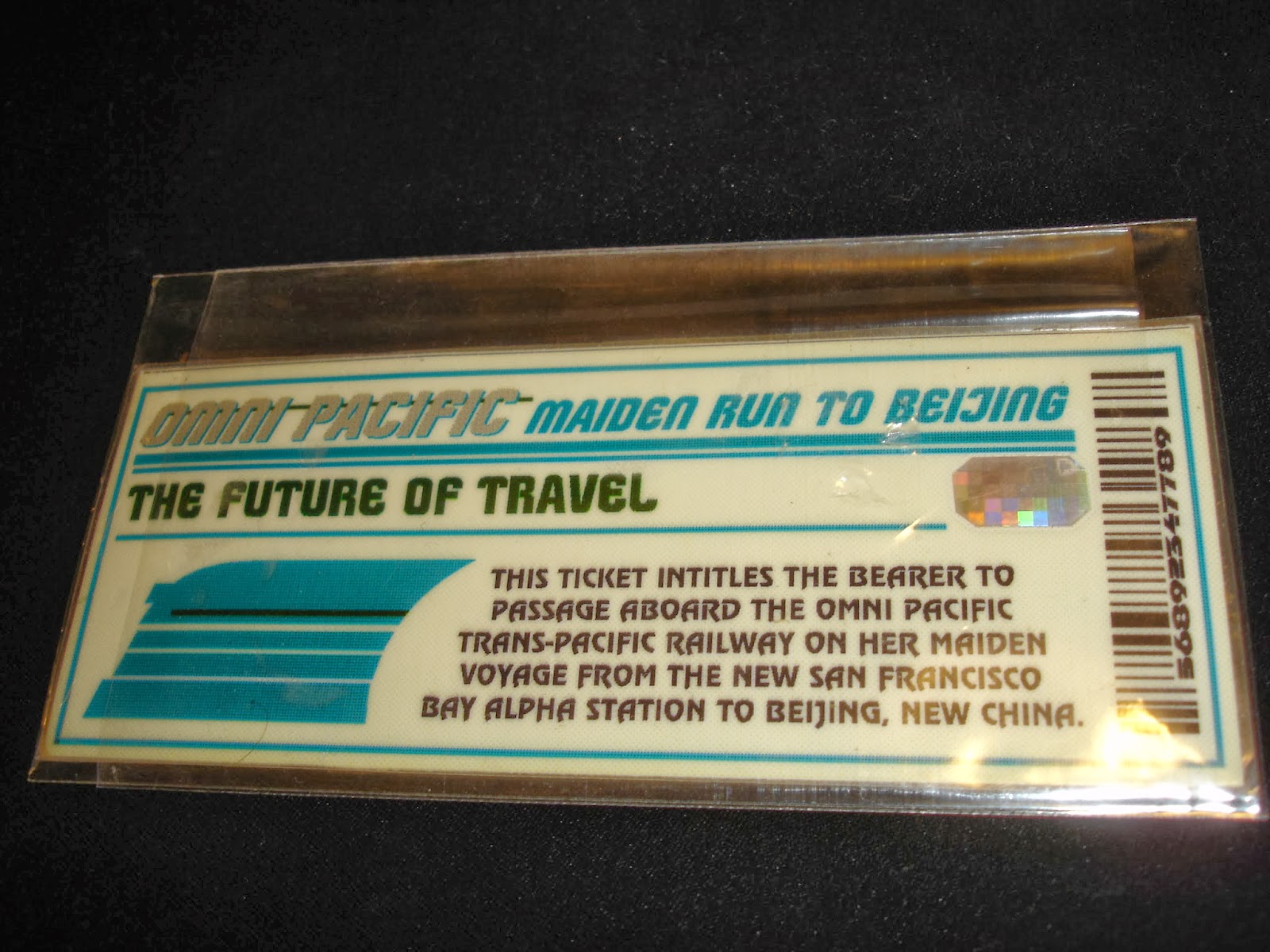 Below the jump, just whose ticket was it?

Hello again from the seaQuest MPS Blog as patch week wraps up.  seaQuest uniforms displayed the person's rank with these types of patches on the right shoulder.  A smaller version of this rank patch was also on the left and right side of the collar.  The number of bars and stars signifies to rank, and the color relates to the department.  This light blue one with four bar is for a Chief Petty Officer who was part of the deck crew. 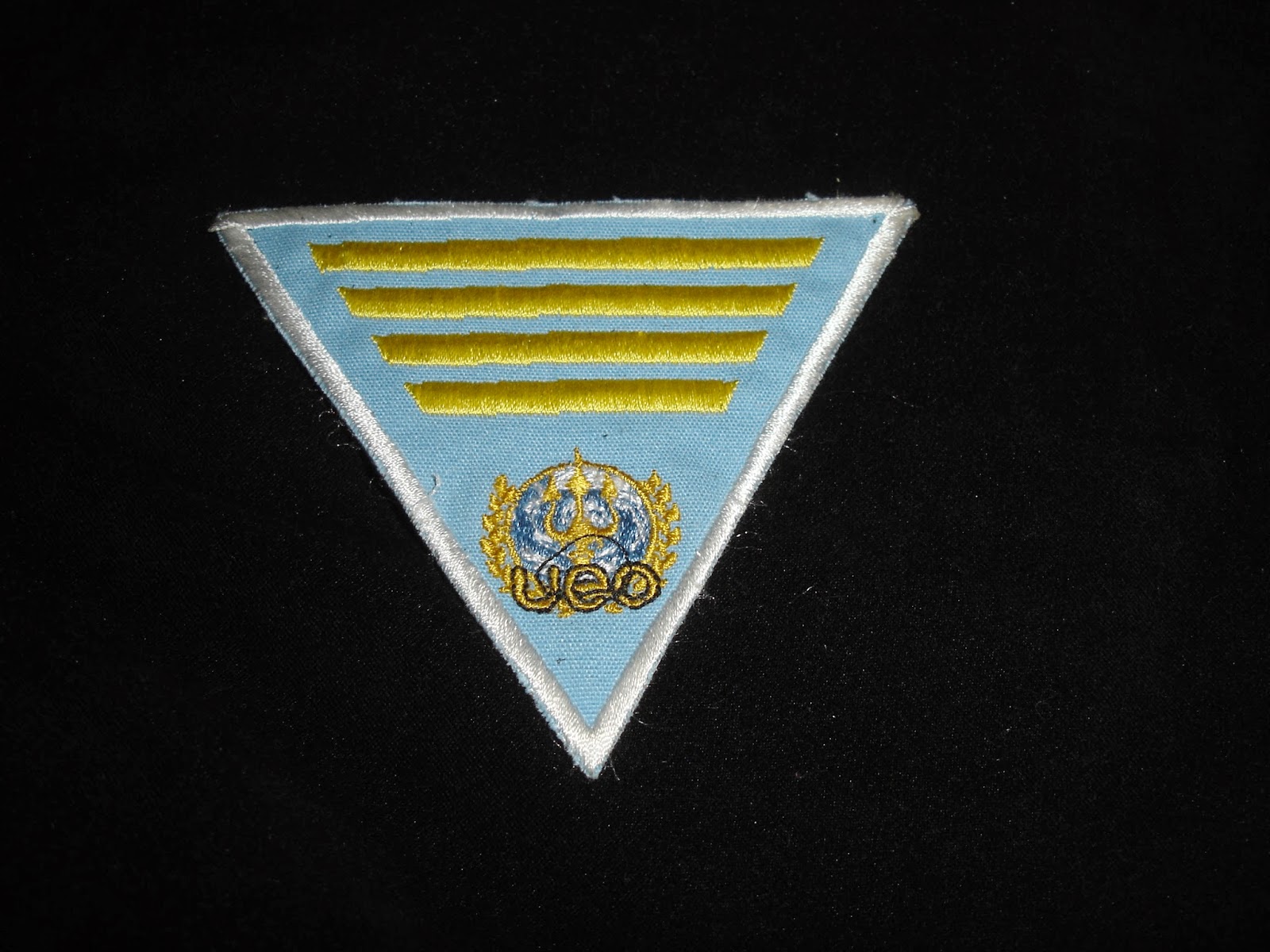 Of course, Chief Crocker wore this type of rank patch.  This shot is taken from To Be or Not To Be, where it seems they had yet to add the collar patches to Crocker's uniform. 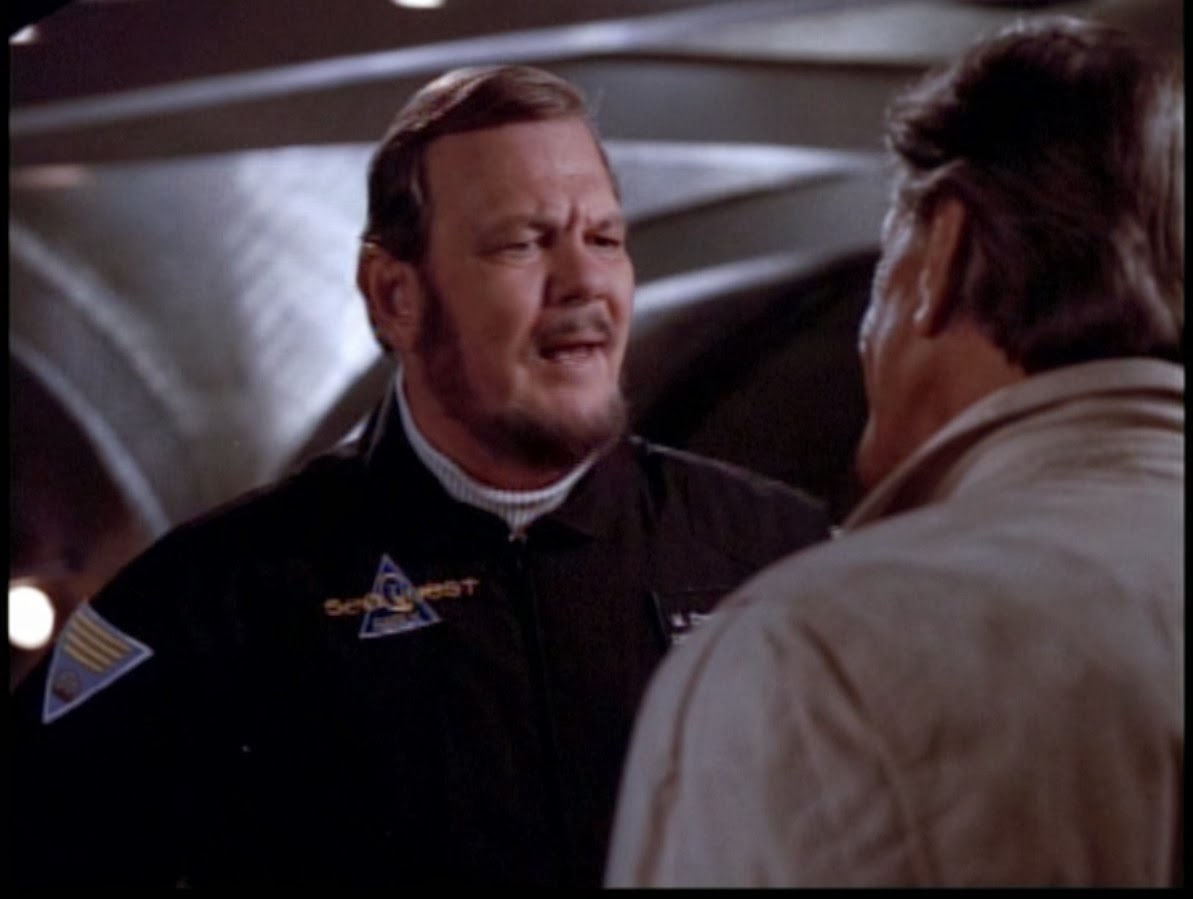 Next time on the seaQuest MPS Blog: An Omni-Pacific Ticket.

Email ThisBlogThis!Share to TwitterShare to FacebookShare to Pinterest
Labels: Patch, Prop, Rank Patch, Senior Chief Petty Officer Patch, To Be or Not To Be
Older Posts Home
Subscribe to: Posts (Atom)